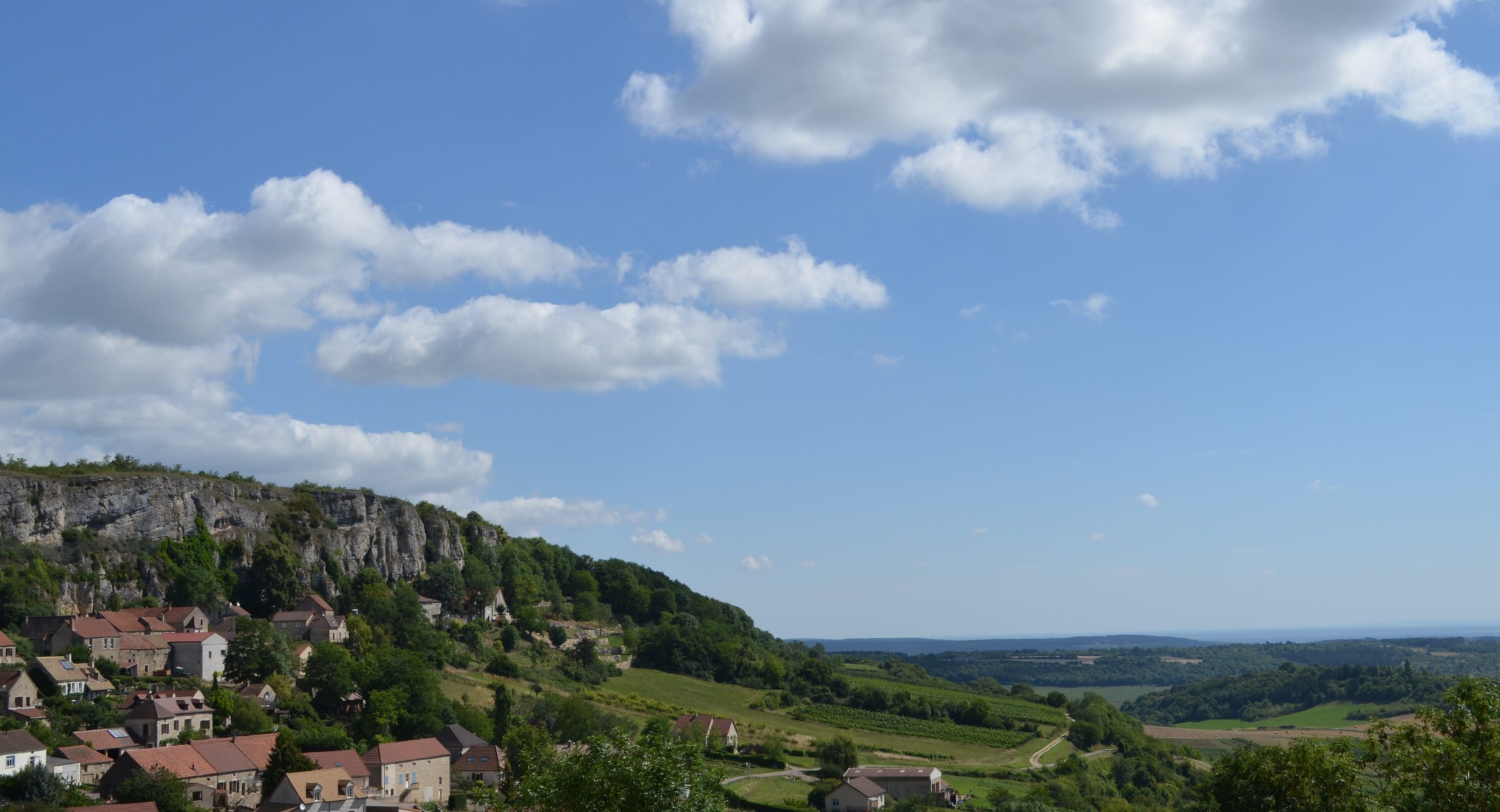 What you need to know about Burgundy.

OK, let's get this out of the way up front: the French call this region "Bourgogne," and that's typically what you'll find on the bottle, although some bottles  say "Burgundy" for marketing purposes. Generally, the white wines of Bourgogne are made from Chardonnay and the red wines from Pinot Noir.

Bourgogne wines are subtle.  Bourgogne Pinot Noirs feature subdued fruits, spices, earthy notes and polished tannins, and the color of the wine will be relatively light.  But don't be deceived by the color - Bourgogne Pinots can be intense.  Good quality Bourgogne wines will develop noticeably in your glass over 20 minutes or so.  In contrast, New World Pinots typically have more overtly fruity flavors, darker colors (often because coloring agents are added), heavy oak and high alcohol (13.5 - 15.5 % alcohol by volume for New World , compared to 12.5 - 13.5 % for Bourgogne).

Bourgogne wines are classified into a four level pyramid. As you move up each level, the production standards tighten, and the quality of the wine, and its cost, increases. That said, there are many fine wines to be found in the lower quality tiers, and some disappointments in the higher tiers. In Bourgogne, the best guarantee of quality is to find a good producer. 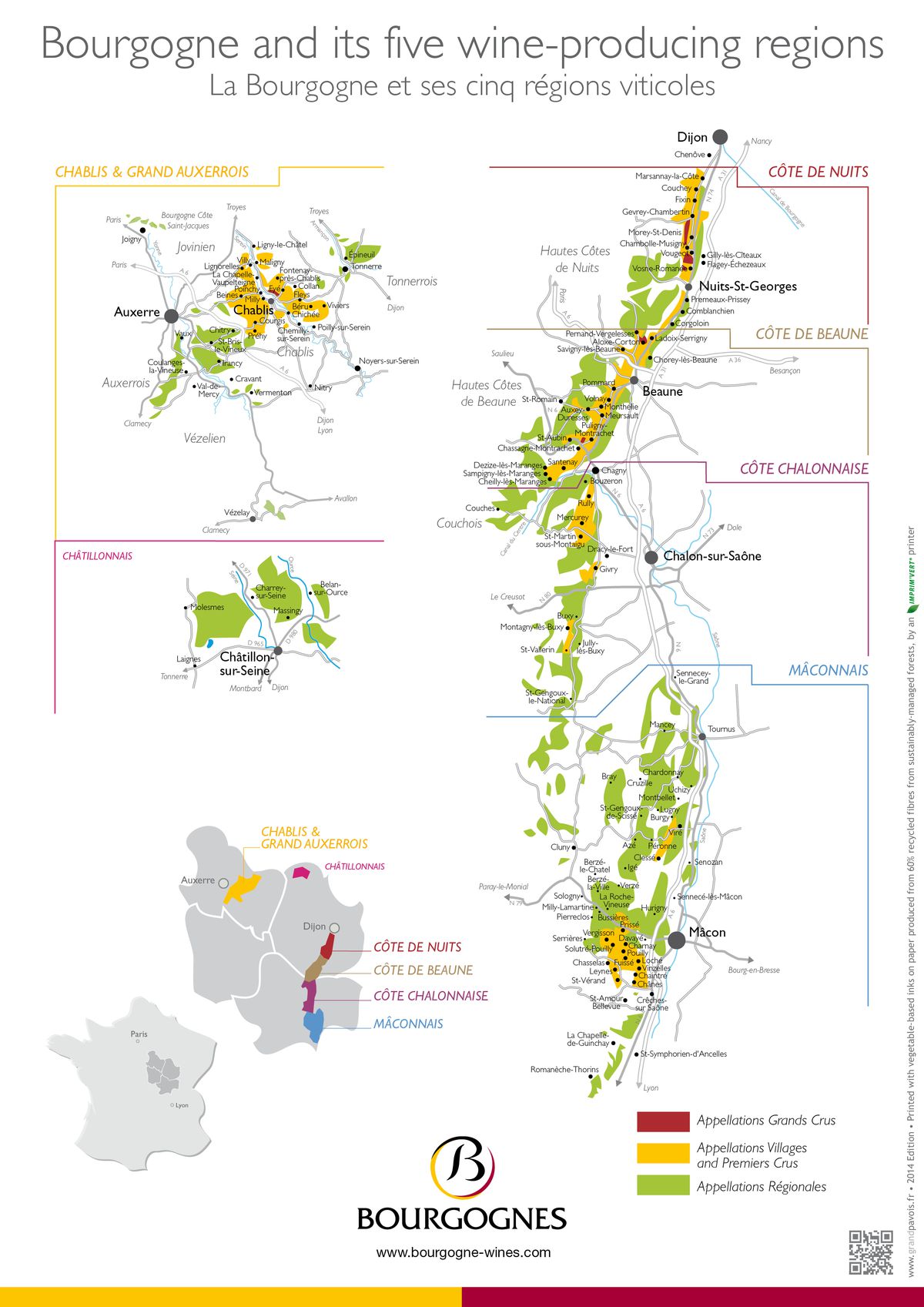 Bourgogne consists of five distinct sub-regions, illustrated on the map above, that extend approximately 140 miles from Chablis in the north to Macon in the south.   Although the regions use the same grapes, they produce significantly different wines and, in fact,  there can be substantial variations within a single region.  Typically, Bourgogne wines are made from a single grape, rather than blends such as are found in Bordeaux and the Rhône.  Although people often think of these wines as being red, almost 60 % of Bourgogne wines are white, 30 % red and rose and 10 % cremants (more on cremants below).

Bourgogne is complex and can be difficult to navigate on the wine list or in the wine store --  but we provide the basics below.  Much of this complexity stems from Bourgogne's finely-tuned sense of terroir, where subtle differences are reflected in individually named climats.   Although Bourgogne accounts for only about 6 percent of French wine production, it contains 20 percent of the country's Appellations d'Origine Contrôllée ("AOCs" - quality wine appellations).  There are strict rules on what grapes can be grown, as well as permissible viticultural and wine making practices  for each appellation.  Because the Burgundians believe that the grapes are merely a mean of expressing the terroir, the wines of Bourgogne typically include the appellation but not the name of the grape on the label.

Another reason for the complexity is that, as a result of historical events (primarily the French Revolution and the Napoleonic Code), ownership of the vineyards of Bourgogne is highly fragmented.  The average size of a Bourgogne domaine is only about 15 acres.  It is not unusual for a domaine to own just several rows of vines in a specific vineyard.   As an example, the grand cru Clos de Vougeot is owned by nearly 100 different owners, each of which may use different viticultural and production techniques.  So, two wines from the same grand cru may vary significantly in quality.  In the case of Clos de Vougeot, the vineyard is nearly 100 acres and there are multiple climats within the vineyard in addition to the fractionalized ownership.

In Bourgogne there are exceptions to virtually every rule.  That's what makes it interesting!

Domaine: a collection of vineyards owned by a single entity.  A domain typically produces individual wines from each of its vineyard holdings.

Climat: a precisely delimited plot of land that has specific geological and climactic conditions.

Clos:  A vineyard surrounded by a stone wall.

The Bourgogne regions.  There are five regions, each unique in its own way.  Below we provide highlights on each of the regions, and describe some of the key appellations in that region.

So how do I pair these wines?  Bourgogne experts can debate  what specific wines go with particular food, but for most occasions pairing is pretty simple.  Bear in mind that Bourgogne wines are subtle, and may not be a great choice for an overpowering dish.  That said, Bourgogne wines are among the most food-friendly wines in the world. So, experiment and see what you like.