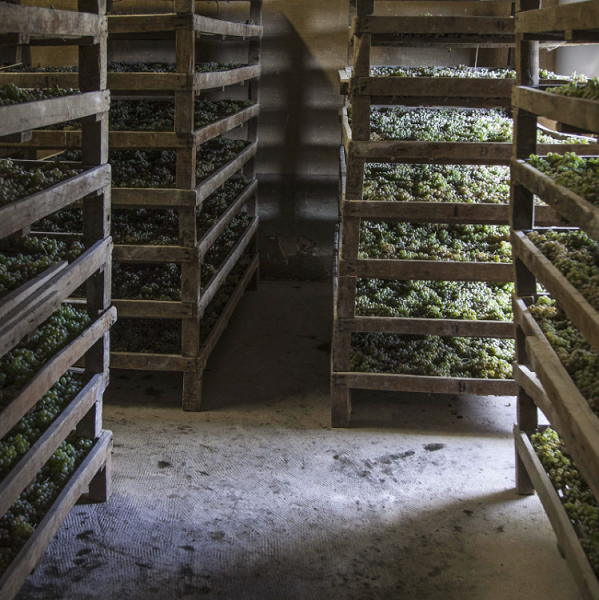 For most people, climbing up to the attic to see what’s been gathering dust for several years is  unpleasant.   Not so for the Tuscans.   Their signature dessert wine – Vin Santo – traditionally was made by drying grapes in the attic for about four months to concentrate the sugar and flavors, and then slowly fermenting the wine in small oak barrels and leaving it in the attic to age for several years.

The first time that I tasted a Vin Santo, it was with pleasant company on a spectacular summer evening overlooking the Tuscan countryside.  I hadn't been a fan of sweet wines until then, but this was a revelation about how good they could be.  Which brought up the age-old question: was the wine really that good, or would a glass of motor oil have seemed special under the circumstances?  While I can't deny that I'd prefer to drink Vin Santo in Tuscany, it's pretty darn tasty at home.

Our wine of the week is a 2009 Badia a Coltibuono Vin Santo del Chianti Classico (about $40 for a 375 ml bottle).   This very good Vin Santo is a Wine Concepts favorite, and worth the price.   It's made from organic grapes, and aged about six years in small oak barrels.  The color is brilliant amber, and it has enticing aromas of honey, apricot and a hint of citrus.  On the palate, it's full-bodied, rich and sweet, with honey, apricot, orange peel and hazelnut notes.  The acid nicely balances the sweetness of the wine, which has a long, pleasant finish.  You should serve Vin Santo at 60 to 65 degrees.

Vin Santo Pairings. Traditionally, Vin Santo is served with hard almond biscuits called cantucci.  This is a contrasting pairing - rather than trying to match a sweet dessert, the wine softens and sweetens the dry cookie, and the cookie moderates the sweetness of the wine (yes, it's OK to dip the biscuits in the wine).  Vin Santo also pairs well with blue cheese, Parmigiano Reggiano, Gorgonzola,  liver paté and desserts with chocolate and hazelnut flavors.