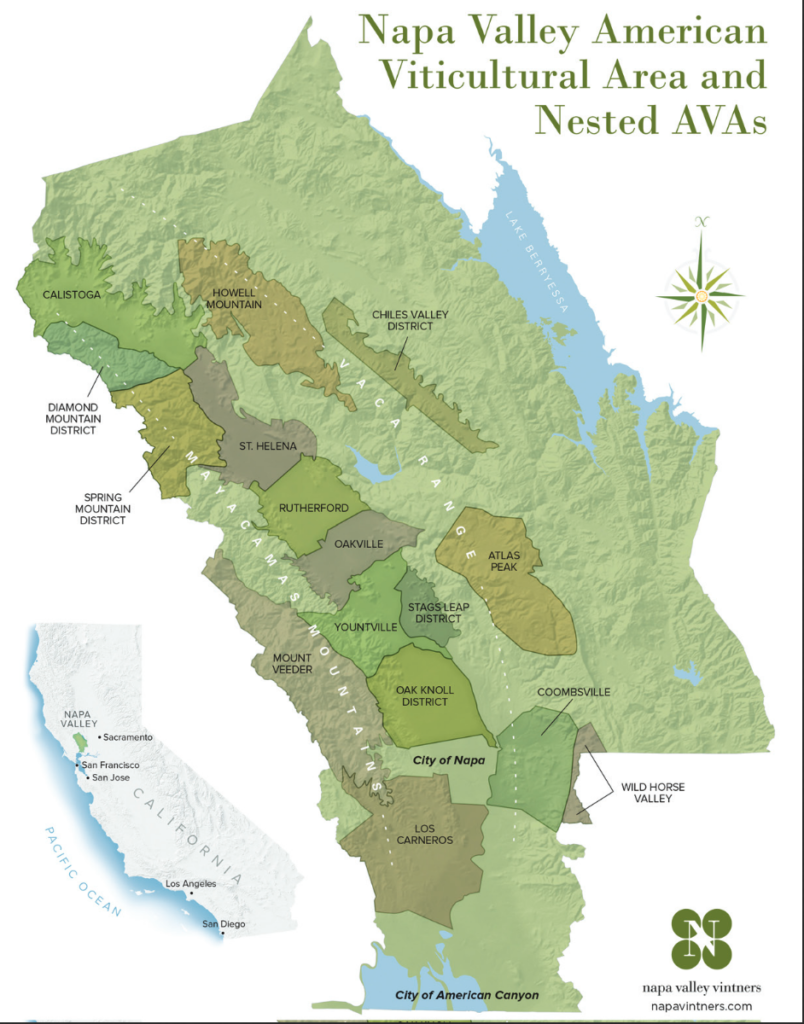 Napa Valley wines can be a bit complicated.   So, despite the fact that there are about 60 grape varieties grown there, let's focus on Cabernet Sauvignon and Cab dominant blends.  More specifically, we'll focus on distinctions between the higher elevation "mountain" wines and lower elevation "valley floor" wines.  The inspiration for this post was a recent Society of Wine Educators conference, where I had the opportunity to taste fifteen wines that illustrated typical Napa Cabernet characteristics.

Napa Valley consists of sixteen sub-regions (shown above) with diverse climates and soils.   While there are distinctions in wine styles among these sub-regions, the major distinction in Cabernet styles is between the higher elevation "mountain" appellations and the valley floor appellations.  Of course, the winemaker's practices can blur those differences.  For example, the winemaker may chose to emphasize oak, blend Cabernet with varieties such as Merlot, or emphasize the fruit.  If you want a deeper dive on Napa wines, a great resource is the Napa Valley Vintners website.

Napa Valley punches well above its weight class.  Its global reputation as the best American wine region began with the 1976 "Judgment of Paris," where a panel of European judges scored Napa Cabernets and Chardonnays ahead of prestigious French wines, and continues to this day.  Yet, Napa contains only about one-sixth the vineyard acreage as Bordeaux, and accounts for only about four percent of California wine production by volume.  However, Napa accounts for twenty-five percent of California wine sales revenue.

Napa Valley is bordered on the west by the Mayacamas Mountains and on the east by the Vaca Range.

Our wine of the week is the 2015 Clos Du Val Napa Estate Cabernet Sauvignon (about $45 - 50 retail).  This valley wine, made from estate vineyards in the Stag's Leap District and Yountville, is a blend of 80 percent Cabernet, 12 percent Merlot, and 8 percent Cabernet Franc.  It's aged in 60 percent new oak.  Typical of valley wines, it's full-bodied, and has velvety tannins and lush fruit.  The Clos Du Val clocks in at about 14.7 percent alcohol.

The bottom line: it's a matter of taste.  Try the two styles of wine and then let us know what your favorite Napa Valley wine is!