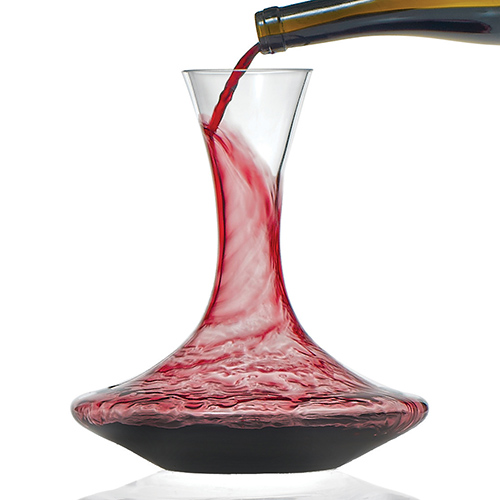 I’m often asked, “When should I decant a wine?” As with most wine topics, the simple answer has been complicated by “experts,” who seemingly can turn any subject into rocket science. Basically, there are two reasons to decant a wine: (1) you have an old wine that has sediment that you don't want in your glass, and (2) you have a young wine that needs aeration to “open up” so that you can fully appreciate its taste and aromas.

With older red wines, the goal is to leave the sediment in the bottle but not unduly expose the wine to oxygen. The older a wine gets the more fragile it becomes, and oxygen exposure will cause it to fade quickly. So, with a decades old Bordeaux you’ll want to decant just before serving. In contrast, a five- or ten-year-old wine will likely benefit from an hour in the decanter.

With young wines, the goal is to expose the wine to oxygen so that it will open up. Pour the wine vigorously into the decanter so that it splashes around (increasing its exposure to oxygen) and then let it sit for an hour or so. Decanting some young wines, particularly big, tannic reds, will allow them to shed any undesirable odors from being closed up in a bottle and help the flavors and aromas to develop.

Some tips on cleaning the decanter. Don’t use dish detergents – the residue will persist and affect the wine the next time you use it. Do rinse it with hot water soon after use. To clean stains or cloudiness on the inside, put some crushed ice in along with water and swirl it vigorously.

All of this talk about decanting, of course, was merely my excuse for selecting a 2012 Château Brane-Cantenac as our wine of the week (around $120 retail). This left-bank Bordeaux from Margaux is a second growth that is 68 percent Cabernet Sauvignon, 32 percent Merlot, and aged in mostly new oak for 18 months. This is a subtle, elegant wine, with a smooth texture and silky tannins. On the nose, it has muted red fruits and a touch of tobacco, and on the palate it’s medium-bodied, well-balanced, with subtle dark red fruit, chocolate and white pepper. It has a long, interesting finish. Overall, an excellent wine.